Below you can find the exact timetable for Imagination Festival 2018. 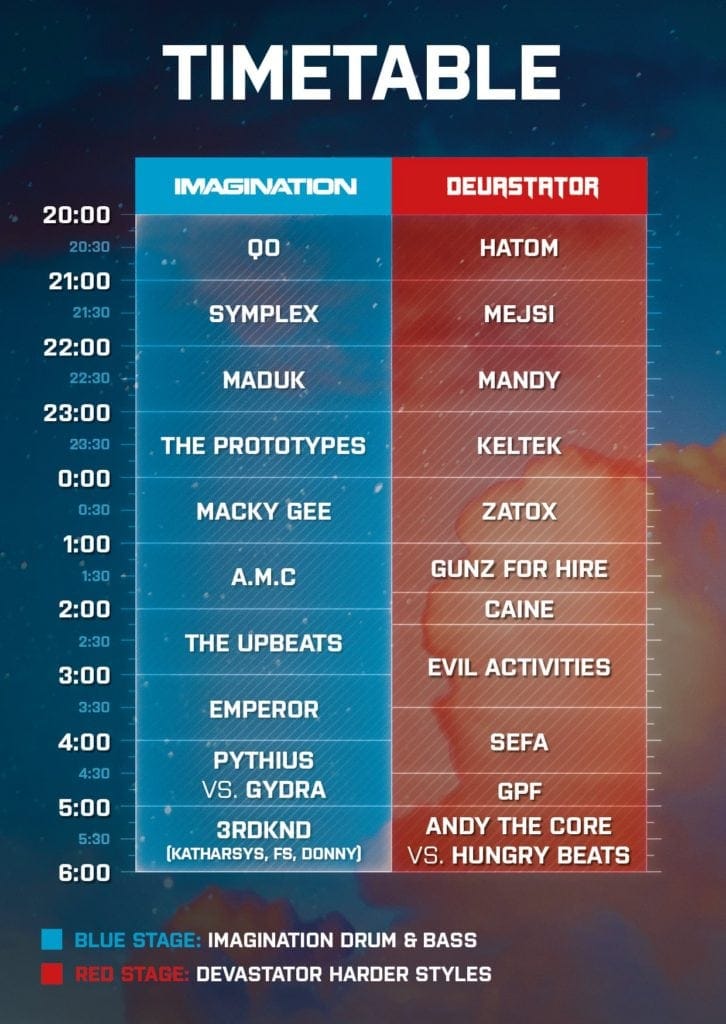 Imagination Stage will concentrate on all of drum & bass sub-genres in the progressive concept in which will gradually mix liquid funk with the mainstream of drum & bass. Later on the people of Imagination will also get a proper dose of jump up, neurofunk and the line up will be closed with the best of the dark drum & bass.

For the first time, Imagination will introduce a home-based discovery who calls himself QO. He plans to play the latest of his neurofunk production. If the name QO does not ring a bell for you, we encourage you to listen to his work.

The best of the melodic liquid drum & bass, will be guaranteed by the Liquicity icon, the amazing Maduk. Mark has worked his way up to top ten in the industry for the last few years and has been able to create a strong competition to labels like Hospital Records.

English duo The Prototypes from Viper Recordings who are famous for their sharp dance beats will have their premiere at the Imagination Festival. We will probably never forget their hits like „Rocket Guns Blazing“ and „Pop It Off“

Imagination will finally greet a jump up icon, drum & bass dj and producer Macky Gee. He is currently enjoying great popularity around the world, and his tracks are also being played in completely different genres of electronic music at huge festivals.

For fans of unbelievable dj mixes, which always surprise many of us, will be ready a triggered ticking bomb named A.M.C. For several years, Alex has successfully defended the Czech Drum & Bass Awards in the best drum & bass DJ category and is well known that Imagination Festival has a big place in his heart.

After a few years, New Zealand’s duo The Upbeats will make their comeback to our festival. After their first appearance at Imagination in 2012, they have literally fell in love with Czech audience. They are very excited  to return to Prague and you will be able to enjoy their latest compositions and collaborations with, for example, great artists such as Noisia.

After The Upbeats, Imagination Stage visitors will be tempted by the darkness. Emperor brings to Letnany the latest of his neurofunk production from Critical Music. This time people of Imagination will be finally able to enjoy him in solo set.

Audience will be brought into the rhythms of a really hard neurofunk by Dutchman called Pythius representing Blackout label. He will play in an exclusive versus set with the fast-growing Russian project Gydra, who caused a serious earthquake on the drum & bass scene in 2018.

Redemption will be found in the final set of the project called 3RDKND. Represented by three interprets Donny, Katharsys and Forbidden Society they are going to open the gates to the darkest corners of drum & bass.

Prepare yourself for two gigantic stages with unique design decorations, a massive laser & light show, a professional sound system and a great line-up as always.

The journey through Harder Styles starts by Slovak producer Hatom, who is signed to a famous harder styles label Funky Cat. His track Summer Trippin has also been featured in Hard with Style podcast and Power Hour on Defqon.1.

Mejsi will appear for the first time in solo set on one of the biggest stages in central Europe. She’s started as an EDM DJane but by the time she found her way to the style we all love the most! Prepare for banging Hardstyle set and maybe something new from her production.

Next representative of DJanes will be talented Mandy from a Dirty Workz label. With her first hit single Raggadrop she already made a big hole through the world and from belgian princess, she became a queen that has already played in Australia or Chile. This time she will make her premiere at Devastator stage.

As a former member of Psyko Punkz, he had already played as a first Hardstyle act ever at Imagination festival in 2013. His life has brought him on a journey of a solo career and that means that Devastator stage will host Sven Sieperda, better known as Keltek. His tracks has already brought him a many milestones in just 2 years. Enjoy this melodic master at Imagination!

A hardstyle hero of our crowd, Zatox, will arrive this year to dominate great stages in Expo Letňany. Italian master, which has already played on all legendary festivals and parties, will show his new tricks to Imagination crowd together with his MC – Dave Revan.

Masked murders Gunz For Hire will be coming to Devastator stage as a first hardstyle live act in history! This collaboration between famous producers Ran-D and Adaro has already dominated stages all over the world. Brutal raw energy is coming to show the best of dark Hardstyle to all of our fans!

Scottish producer Caine will show the most brutal and raw side of Hardstyle in his Devastator premiere. Dark force combined with brutal kicks defines this viking warrrior. He’s ready to conquer the gates of Imagination festival.

Heroes that defined our style always had their place in our line up. Throughout the years we’re proud to bring such a legends of Hardcore as Angerfist, Art of Fighters, Noize Suppressor, Drokz or Day-Már. And now this amazing list of legends will be joined by Evil Activities.

Sefa has started his journey of producing at just 10 years. From Hardstyle he has step-by-step developed to faster and stronger genres of Hardcore, where he, as a artist, could discover himself. Thanks to these experiences and long training he became a big star in 2018 that could fill up all the halls or tents at festival. Now you can enjoy him at Devastator stage!

For the first time a more lightweight act has appeared at Imagination lineup. Greazy Puzzy Fuckerz are representing a more funny act. Their countless remixes, a album or so called „Sex Show“ will quickly get to your sense of humor and absolutely destroy your dancing feets. It’s time, to have sex!

Devastator stage is well known for it’s unbreakable power which will not let anyone home until the final execution. This year the place of final executors will be filled by Italian psychopat Andy The Core in back to back set with proudest Czech export Hungry Beats. Their spicy desert is ready to serve in final set of the night!

Your host of the night will be another Harder Styles legend. We’re proud to introduce to you the man, that has already show up on every important harder styles stage and brought to life the biggest one of them – Qlimax. Now MC Ruffian will show his skills to Devastator people of Imagination Festival!

Prepare yourself for two gigantic stages with unique design decorations, a massive laser & light show, a professional sound system and a great line-up as always. Tickets are on sale in Go Out network and the price increases with each sold out wave.